Today’s release is a pleasant surprise even to us. Last week, a Sandstorm fan, Jake Weisz, e-mailed me out of the blue to tell me he had ported EtherCalc, an online collaborative spreadsheet editor, to Sandstorm.

I hadn’t heard of EtherCalc before, but Jake included a link to a spreadsheet running on our own alpha server, so I was able to try it out immediately, and I was impressed. Sure enough, it’s a spreadsheet editor, it does the things you expect spreadsheets to do, it supports real-time collaboration, and it’s Free Software. 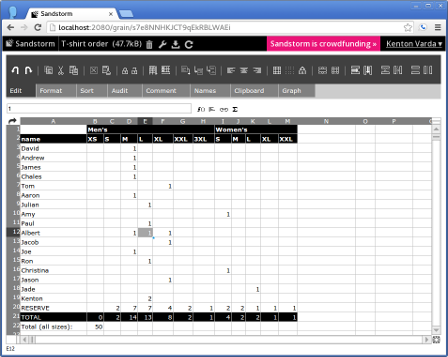 Jake professes to have had no idea what he was doing. “I have never even seen Node.js before, I don’t even know JavaScript, and I have only a passing familiarity with using Linux.” Yet, by just following the porting guide, he managed to port an app. Jake attributes this to EtherCalc’s simple and elegant design: “The way it was already designed, it was incredibly easy to port to Sandstorm. I think I changed three or four lines of code tops to get it working.”

Speaking of EtherCalc’s design, developer Audrey Tang has written a long and fascinating history of EtherCalc (and its previous iterations, WikiCalc and SocialCalc) for the book series The Architecture of Open Source Applications. These chapters have also been reproduced on EtherCalc’s web site. Check it out!

Meanwhile, Jake’s port is on the Sandstorm app list now. As always, you can install it on your Sansdtorm server, or try the demo.