Today we’re releasing our port of Roundcube, another open source e-mail web app. You can go install it from the app list now, either on your own Sandstorm server or on our demo. 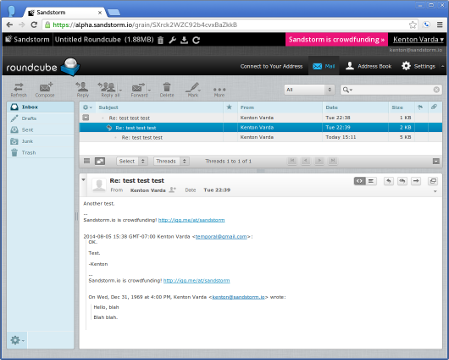 To this you might ask: What happened to Mailpile?

Nothing happened. We support both! We like Mailpile, but we also want to give you choices. With Sandstorm, you can mix and match apps from competing developers as you see fit, while still retaining the unified experience of Sandstorm.

Usually, when you sign up for a company’s suite of “cloud apps”, you have two choices:

We call this the “walled garden” problem. Big SaaS (Software-as-a-Service) providers tend to build walled gardens of apps that only integrate with other apps from the same developer.

It would be easy and convenient for us to say that these companies are Evil and just want to lock you in, but that’s not true. The reality is that integration across security realms is hard. When each company has their own notion of users that can’t easily be mapped to each other, and understandably no company is willing to trust other companies with their security, how can you integrate apps containing private data? The answer in practice is OAuth, but OAuth permissions requests are clunky and disruptive to the UX. Some users are scared off by it – while others aren’t scared enough and just click “OK”.

But developers within a company are perfectly willing to trust other developers in the same company to get security right, and so the entire OAuth dance can be skipped in these cases. This makes first-party integrations easy. Now imagine what would happen if a single company’s own apps had to OAuth to each other before integration. Imagine, for example, if Google Docs had to ask you for permission to fetch your contact list from GMail before enabling auto-complete of contact names in the share dialog. Probably, Google Docs wouldn’t bother, and there would be no autocomplete. Or imagine if the Facebook profile page had to ask for permision to connect to your Facebook photos before you could set your profile photo. This would be a huge pain! And even then, it wouldn’t necessarily end the walled garden: with OAuth, an app says “I need permission to talk to GMail,” not “I need permission to talk to an e-mail app.” There’s still no opportunity for you to substitute a third-party app in its place.

With Sandstorm, we’re solving a lot of these problems:

We hope these design choices mean you get a unified experience no matter which apps you choose to use, and new players can break into the market more quickly, leading to faster innovation.