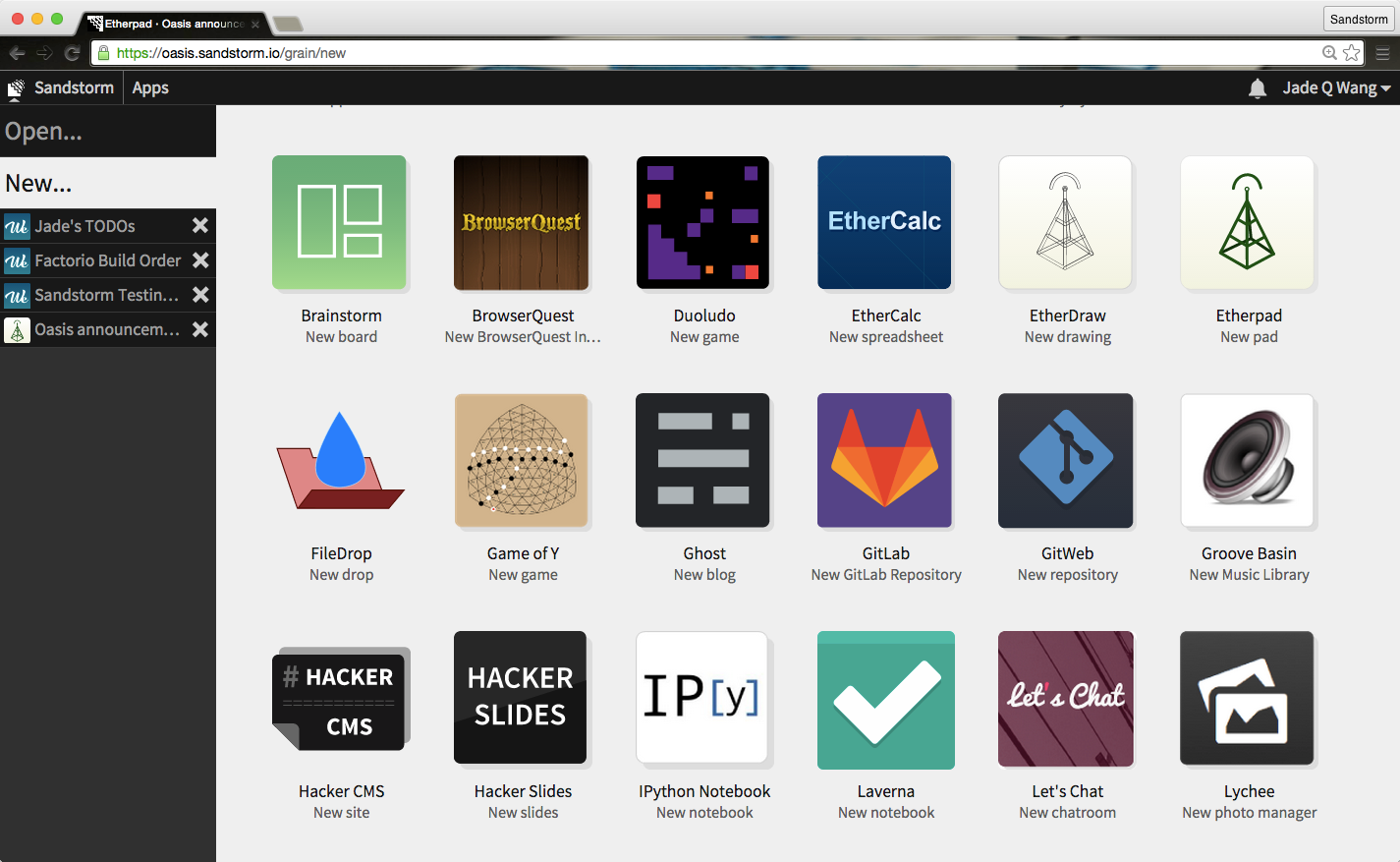 As you know, Sandstorm’s mission is to bring open source and indie web apps to a wider audience. To run open source web apps, you need your own server – the developers aren’t a big corporation with resources to run servers for you. And for everyone to run open source web apps, everyone needs control of their own server. That means that running your own server and installing apps on it needs to be so easy that everyone can do it. Most people do not have the time or expertise to edit config files or use SSH, so we need to eliminate the need. Installing apps on Sandstorm needs to be as easy as installing them on your phone – and it needs to be secure by default.

We’ve made a lot of progress on these fronts – try our online demo to see for yourself. However, up until now, to use Sandstorm, you still had to have a Linux machine to install it on. For many people, that’s great – running on your own machine provides the ultimate in privacy. But running a physical machine is still a burden no matter how easy the software may be, and a lot of people don’t want to do it. That falls short of our goal: if we want everyone to be able to use open source apps, we need to give them another option.

Sandstorm Oasis is a managed hosting service for Sandstorm. For $6/mo. (but free during the beta), we will give you a web-accessible Sandstorm server on which you can install any apps you want. Choose from the apps on our app market or package and upload your own. Or better yet, package your apps and submit them to the app market for everyone to use.

When paying $6/mo for Oasis, you get a much better experience than you would installing Sandstorm on a $6/mo virtual machine elsewhere. In addition to the ease of use, Oasis knows how to give your apps resources when you are actually using them while not wasting any resources when you aren’t. In contrast, a personal VM will typically reserve a constant amount of RAM for the entire month while sitting idle most of the time. This means that on Oasis, you get the effect of having a server with many times more RAM for the same price.

Some might ask: Doesn’t managed hosting go against Sandstorm’s goal of decentralization? We don’t think so: the most difficult part of decentralization is separating the developers from the hosts. Once you are using Sandstorm apps, you can easily move your data between managed hosting and your own personal server, because the same apps are available everywhere. Sandstorm will always be available to run on your own machine as open source software, so the choice is yours. Moreover, we expect that some day there will be many competing Sandstorm hosting services located in many countries.

Today’s launch includes a HUGE update to our user interface. So much has changed that it would be futile to try to describe it; you should just try it. We have, of course, pushed all these changes to our self-hosted users too. Some of you have even been following our Github repo and IRC and helping us test these features early – thanks! For everyone else, run sudo sandstorm update to update now, or wait for the auto-update by the end of today. Don’t have a server yet? Install Sandstorm on Linux now »

Along with today’s launch, we have deployed our new App Market, full of Free and Open Source apps, to replace our old ad-hoc app list. You can now browse apps more easily, complete with ratings and reviews. More importantly, submitting your own apps is now more streamlined: you can upload your package directly from the command-line using the spk publish command. 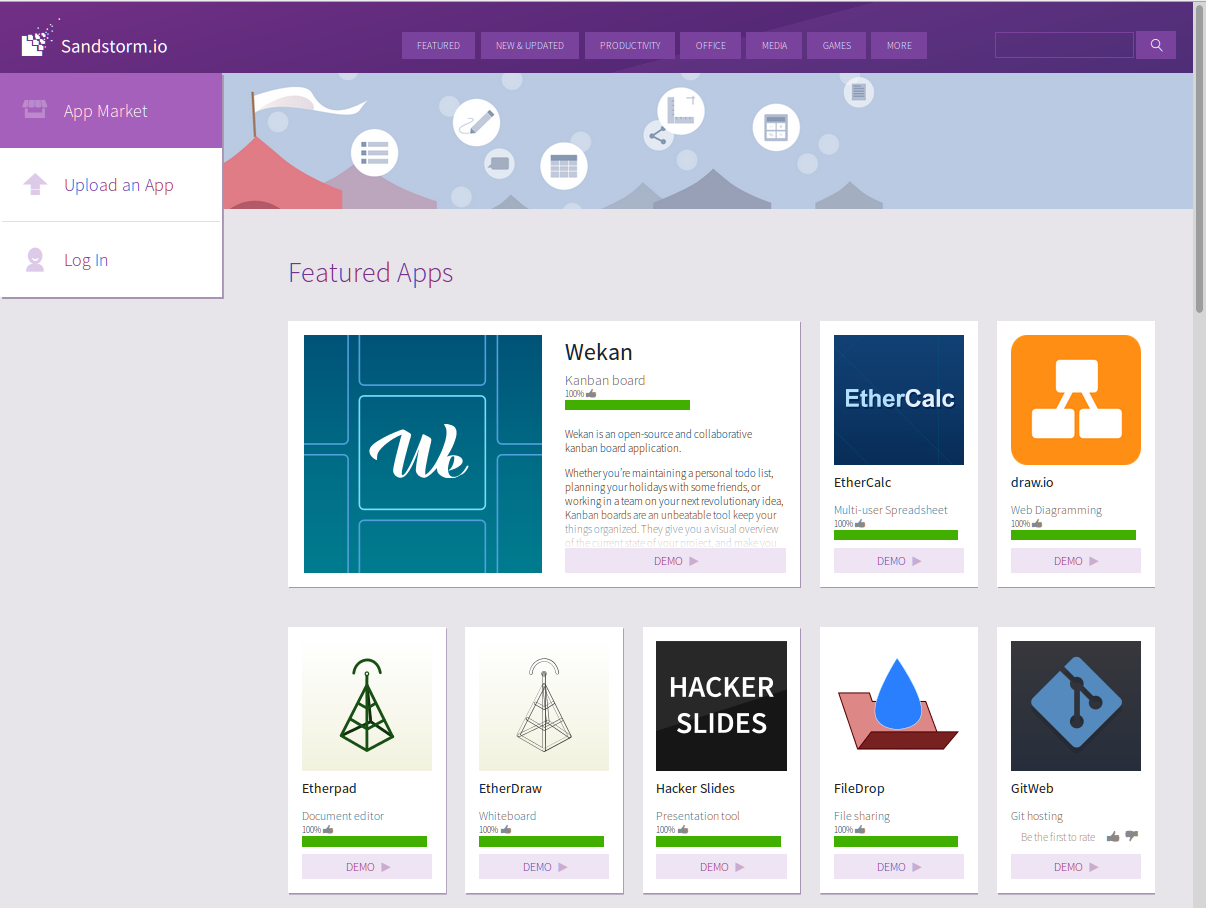 People don’t usually talk about Terms of Service and Privacy Policies. It’s always the same story: a wall of inscrutable legalese that inevitably gives the service provider free reign to do whatever they want, which most users don’t even bother to read.

We wanted Oasis to be a little different. We wanted our terms to address a number of shortcomings we see in “cloud services” today, in each case protecting you, not us. And we wanted to make sure that normal people can read and understand how our terms protect them.

Oasis is not done yet – we have lots to do. We anticipate it will remain in “beta” for several months – and during that time, the service is completely free. To get started with Oasis, head over to oasis.sandstorm.io.

A couple months back, we asked you on Twitter what our managed hosting service should be called. Nearly everyone who replied – and there were a lot of you – had the same answer: “Oasis”. So, thank you for making the decision easy!